Sometimes, when you least expect it, something wonderful happens. My friend Annie decided to celebrate a special birthday in Singapore and invited us along.  We were delighted to accept and looked forward to a week of fun filled days as we explored this jewel of the East.

Flying out of the Gold Coast airport to Singapore on Scoot Airlines, the new budget offering from Singapore Airlines, was so much better than we expected: the new dreamliner was reasonably comfortable, the service good and best of all, we arrived at a civilised time in the afternoon. A celebratory drink and delightful dinner was enjoyed by all at our hotel, the Pan-Pacific at Marina Bay. 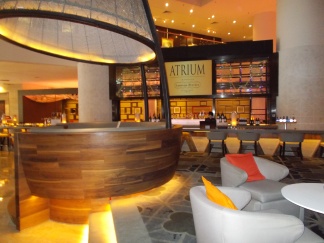 A brief foray into the immediate surroundings brought unexpected delights, including an indoor aquarium constructed entirely from balloons.

But it was  time for birthday shenanigans. Taking full advantage of the beautiful weather, we lazily drifted about the pool and reclined on day beds sipping champagne, while we nibbled the first of two birthday cakes (courtesy of the hotel). 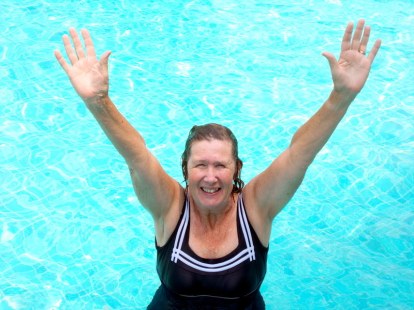 Soon we were celebrating by the pool. 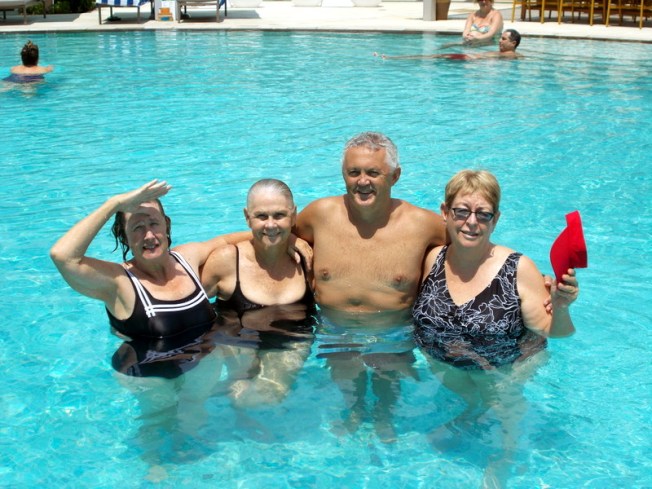 We were resting, preparing ourselves for the birthday feast: the seafood buffet at the Edge Restaurant in the Pan Pacific. 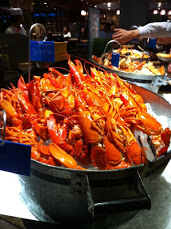 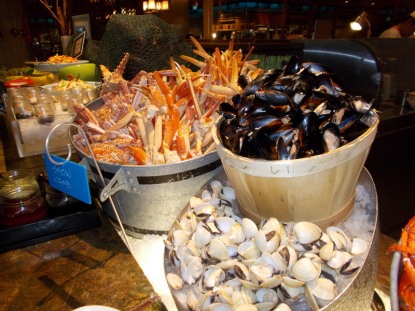 Lobster, prawns, chilli crab, sashimi, prawns, oysters. salmon … what to choose? We took it very slowly, pacing ourselves, savouring each morsel, each of us designing our own perfect combination. A special feature of the buffet were the live food stations. You could just go and request a particular seafood speciality and they would cook it to order and bring it out to you. Magical.

After such a meal, it was time to explore Marina Bay. Singapore’s skyline is amazing and a photographer’s paradise.

It was lovely to see how children are catered for in these open public places. While we were in Singapore, an inflatable Art Zoo, a kind of floating, giant, jumping castle was installed beside the helix bridge and the kids and their parents had a ball.

We enjoyed walking around the bay to the Merlion park where we found a cafe that was actually open for breakfast.

The views across the bay in the morning light were wonderful.

It was time to venture further afield. Becoming real tourists, we boarded the wacky duck, a remodelled WWII amphibious vehicle to explore Singapore’s landmarks by sea and by land. It was great to view familiar sights from the water but we made the mistake of sitting down the back and much of the commentary couldn’t be heard over the roar of the engines. 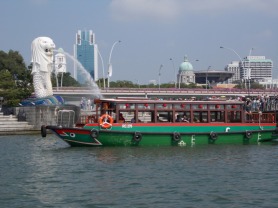 And in the evening dusk, as torchlight beckoned and the fire dancers performed, we met some of the residents of the Night Zoo.

Mastering the MRT, we wandered through the crowded alleyways of Chinatown. I was looking for toddler pyjamas.  I remembered how adorable Christian had looked in his pale green, Chinese pyjamas and how much he loved them, so wanted to find something similar for Genevieve and Hudson.  I bargained hard!  And super cute silk pyjamas found their way into my bag. Looking back though, I don’t know who came out on top; the shopkeeper or me … a number of other items suddenly seemed essential … and the shopkeeper was smiling as she took my money.

We couldn’t resist the novelty of the Gourmet Bus either.

This was an indulgent way to see more of the city including a quick taste of the Gardens by the Bay where the dinosaurs, who were visiting for the school holidays, said ‘hello’.

We returned later that afternoon, to explore the two giant glasshouses and watch the light and sound show in the Super Tree grove. The Flower Dome features plants from temperate, alpine and desert regions of the world. It was cherry blossom time and the bottom floor of the glasshouse was awash in blossom.

I particularly liked the English garden where favourite characters hung out. 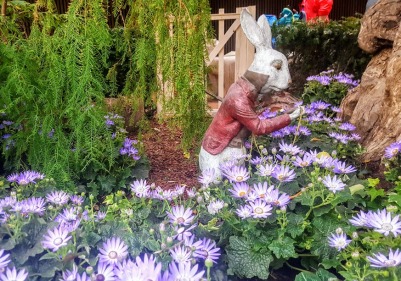 And here and there were sculptures created out of natural materials and a 2000 year old olive tree!

But the Cloud Forest was even more spectacular and far less crowded. Here, the Singaporeans have created a mountain complete with waterfall, inside a gigantic glasshouse that you can meander down. 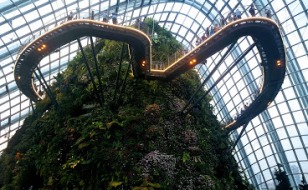 It gives a whole new meaning to a vertical garden! You walk around the base of the mountain, pass a garden constructed out of lego to a lift which takes you to the summit of the mountain. There you can  gaze back over the gardens towards Marina Bay.

There was so much to see as we walked down.

A reflection pool complete with dragonfly, 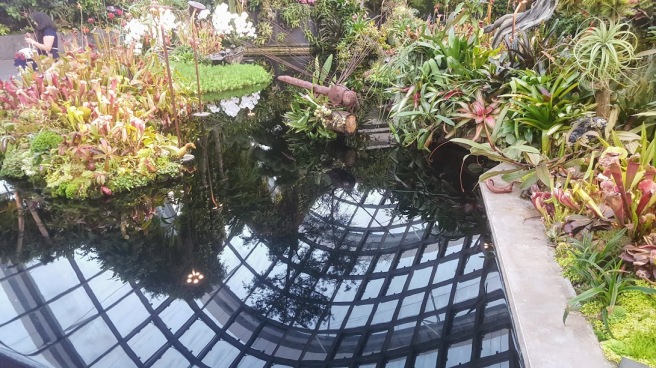 an amazing array of plants, 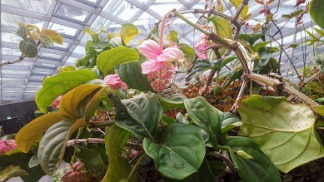 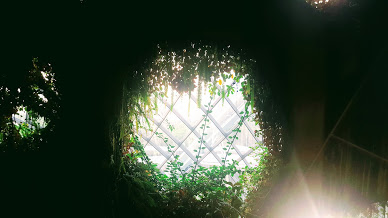 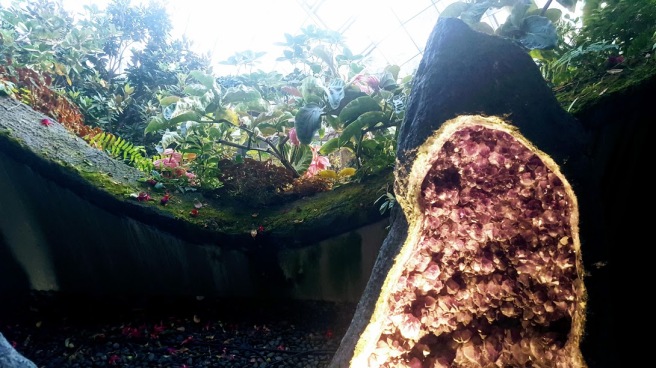 and a secret garden.

But the best was yet to come. We found ourselves a spot in the Super tree Grove to watch the free light and sound show. It was wonderful. 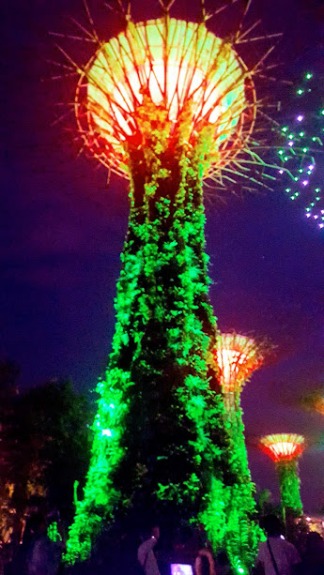 Sentosa Island was our destination for the following day. We caught a taxi to the island and used the free public transport to get around.

The luge was on the agenda.  I remembered my previous encounter with the luge in Queenstown, New Zealand. Driving my sled in a suitably safe manner, I was shocked when an overtaking six year old told me, not too politely, to shift it. This time I was determined to find my inner formula I driver.  And I did … on the third and final run!

Then it was time for a dip in the South China Sea before a delightful lunch overlooking the sea, complete with Singapore slings.  A cable car ride to Mount Faber followed. A delightful way to see the city. 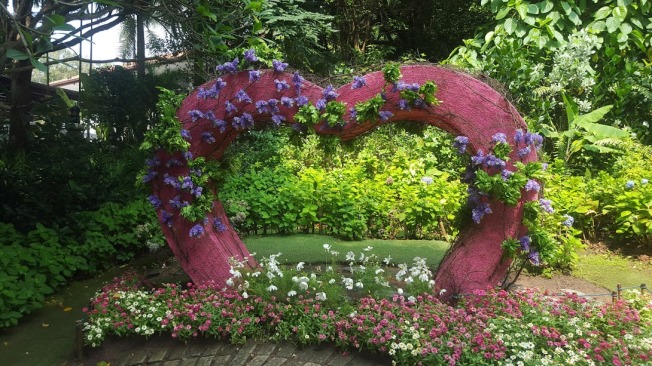 It was time to say goodbye to the birthday party for a day or so. Kenn and I were lucky enough to spend a couple of nights with our nephew, Ben, his lovely wife Deanna and beautiful baby Lewis. Has it been your experience, that where ever you go in the world, you run into someone from your past? This time, we shared a lovely evening with Kenn’s Aunty Norma and his cousins, Pat and Lynn who hail from Condobolin and Parkes in the Central West of NSW. They were visiting Pat’s son Raymond who coincidentally lives in the same complex as Ben and Deanna.  It’s definitely a small world. It had been over 20 years since last we’d yarned but it seemed like yesterday. Family is like that. Guided by Deanna, we explored the beautiful Singapore river like an expat: Robertson Quay, Clarke Quay and Orchard Road. Beautiful by day and by night. 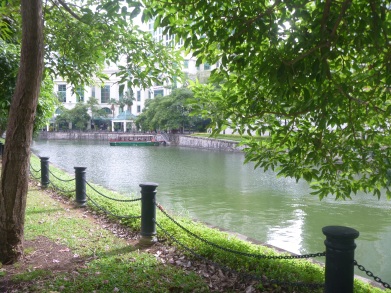 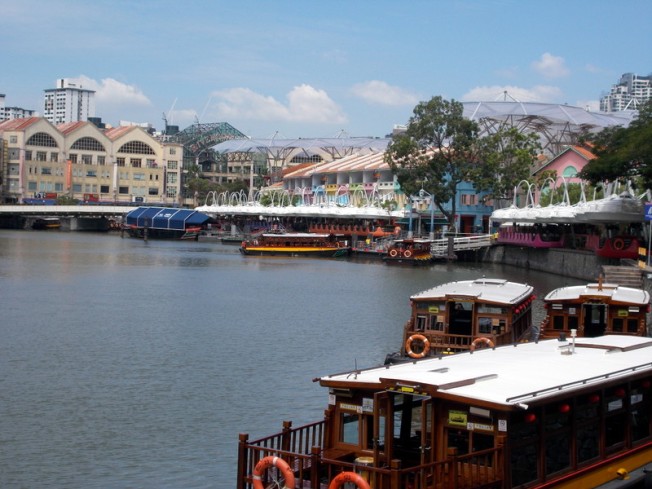 All too soon, our final day arrived. We visited some of the colonial buildings: the Art Gallery, Raffles, the Museum and Canning Park where we had farewell drinks. 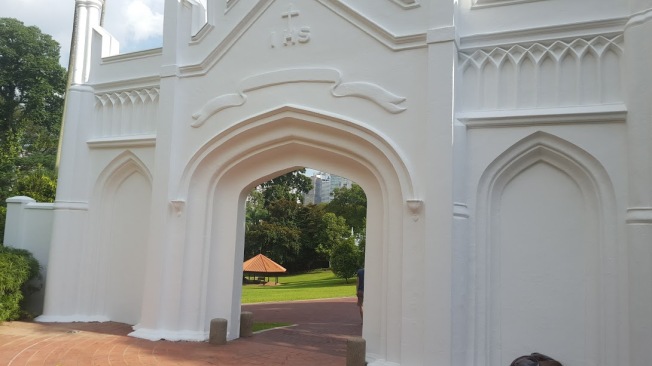 Canning Park was very interesting. We didn’t have time to see the battlebox … maybe next time.

What is your favourite memory of Singapore, the lion city?

Too often, Singapore is seen as a stopover destination – a place to spend a few hours on the way from Australia to Europe. But I think that you need more. After a week, there was so much we didn’t see or experience. On our next trip perhaps?